The Columbus area’s native populations – the Choctaw and Chickasaw, also known as the Muskogee or Creek – may have regarded Hernando DeSoto and his party as a mere curiosity when the conquistador’s party crossed the Tombigbee here in 1540. And this shouldn’t come as a surprise; the ancestors of both tribes have lived in communities in the area for as many as 8,000 years, dated by oral Choctaw histories which seem to suggest the presence of mammoths – creatures “whose tread shook the earth.”

By the time of the War of 1812, the tensions between Native Americans and Anglo settlers resulted in the area’s first civil war — not the war between the Blue and the Gray, but a civil war within the Creek nation, pitching the so-called Red Sticks, named for their red painted war clubs and medicine sticks, against other Creeks who were keener towards assimilation with the increasing numbers allied Anglo Americans. Much of this struggle occurred near the Plymouth Bluff area, today employed a bit more peacefully as a beautiful 190-acre educational and recreational facility. And while times do change, the history and culture of past populations is very much alive and on display in Columbus, Mississippi. 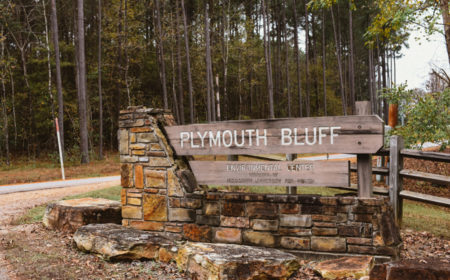